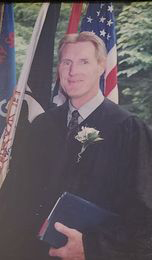 Charles (Chuck) Sexton Grew up in Atlanta, Georgia and first arrived at Carson-Newman in the Fall of 1971 at which time he pledged Philos. He married Kathy Ownby in 1974 and graduated from from Carson-Newman the following year. Chuck then enrolled in Walter F. George School of Law, Mercer University from which he graduated in 1978. He and Kathy moved to Kodak, TN and joined First Baptist Church, Sevierville where he served as a deacon and Sunday School teacher. He also served as a Public Defender for Sevier County and then as Sevier County Juvenile Judge. Chuck also served many years in a private practice and retired in 2020. He and Kathy have two children—Kimberly Wilhoite (a Carson Newman Graduate) and Christopher (a United States Military at West Point Graduate). Chuck and Kathy have six grandchildren.